Well, hello there, Week 8. It’s crazy but you’re the halfway point of the NFL season—kind of—the benchmark for when we as enthusiasts can really start to dissect and understand what the hell is happening from division to division, team to team, Tom Brady to Fozzy Whittaker, Frostee Rucker and so on.

Well, yeah, except for this year of course.

Yet, here we are—still waiting, anxiously, for the next week, the next snap on Sunday or Monday or . Yes, even the 6:00 a.m. snooze-haze that is watching the London game on the West coast can be tolerable once you accept the flux of “Male Enhancement” commercials competing for your viewership during that time—Dooooooooo I really need a boner while I’m at an auction at noon with my bidding-crazy lady friend? Does anyone? Florida? Yeah, probably Florida. Got it.

Anyhow, the NFL game is an enjoyable contest of power and strength, various hairstyles and end-zone dances (FLAG THAT, RIGHT THERE, FLAG IT!!). There’s nothing like it! The snacking is next-level enjoyment, intense chip-dipping and pizza-devouring—and, the calories don’t stick because you have the WHY-DID-I-NOT-START-THAAAAAAAAT-GUY sweats.

Hooray for the NFL!

Morgan Freeman said it best, actually: Get busy living, or get busy building a fantasy team.

Smart man, that Morgan Freeman. Good voice. Only guilty man in Shawshank, and the only man to play a president who had to decide if Tea Leoni lived (or not).

So, for those of you who have followed along these past seven weeks, anticipating each pants-splitting swing of the piñata stick, I simply toast to you and say that, in light of the confusion and stagnate season, you keep on reading and enjoying this wonderful sport. Not just for me, or us, but for Tea Leoni.

For the rest of you: Welcome to the party.

What do we know? Well, there are zero—zero!—teams left that have a chance to go undefeated. Yep, all 32 teams have at least one loss, which means that the (now really old) 1972 Dolphins can get together, pop the champagne—or sparkling cider—and drink to their unmatched excellence.

Perhaps they would be interested in that infomercial I saw…?

This team, on the flip-side, really does have a chance to go 0-16. (And, if I’m following that Ohio poll correctly, I think Penn State could beat the Browns.)

This whole time, Chip Kelly has been subliminally letting 49ers fans know what season of Friends he is currently binging. 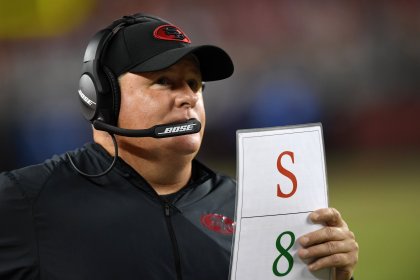 I spent four days as excited as a Caribbean pig knowing that I was going to be able to do a Matt Barkley-Fraggle Rock reference. Then I realized that dog’s name was Sprocket.

This Bears team is just full of disappointments.

The Panthers are that team that constantly skips measuring things when they bake. Now, their championship cake is too salty, too…puffy, the damn thing is lopsided and has a bunch holes in the middle.

That euphemism was brought to you courtesy of all the wonderful bakers who measure things.

Cheech Marin breaking all of Kevin Costner’s clubs in Tin Cup kind of mirrors how the Jets came back to Ryan Fitzpatrick as their quarterback. I mean, when there’s only the 7-iron left in the bag…

You can’t spell Yaguars with a little s-u-g-a-r…which would be a fun reference if this team was actually sweet.

This team had a chance to really turn the tide last Sunday against the Kansas City Chiefs. Now, following yet another loss, I’m dropping them out of my Favorite Saints List in favor of this guy: 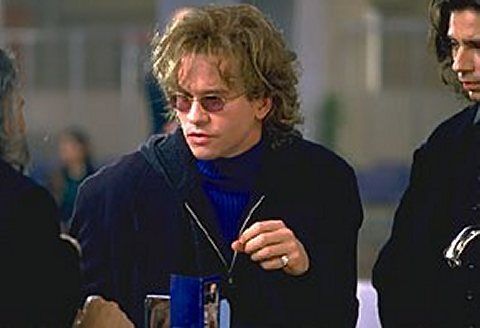 If you Google “Tilda Swinton Tennessee Titans” this is what comes up:

Before you start judging, keep one thing in mind: This team just got beat by the Colts.

Long has the raven been a source of majestic powers, magical exuberance, and makes for a pretty damn cool tattoo.

After a 3-4 start to the season, though, these Ravens have stretched and faded, lost their magical powers, and look like a pair of old Isotoner gloves.

Lord Luck took his noble men to battle against Tennessee and thus kicked the asses of many a Titan like a pack of two-legged steeds. Hear ye’, hear ye’…long live Lord Luck.

Jay Ajayi is just a fun name to say—and he’s also really swell at the running back position, so, double-fun!

Also: I’m still not totally sure what to expect from this Dolphins team, but maybe that’s just their thing.

This team is probably the mystery of the 2016 NFL season. No joke, either. I know I spoke of January Jones and the Lions earlier in the ramble, but my gosh, this team has enough ups and downs to make M. Night Shyamalan stop and say, “What…is this?”

This Sunday against the Oakland Raiders will be the battle of “Things Jon Gruden Once Coached.” And it’s the day before Halloween, too.

So, expect a little bit of this: 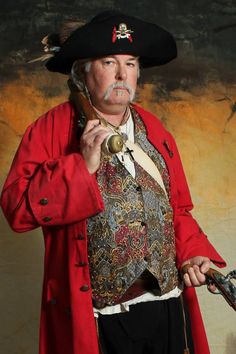 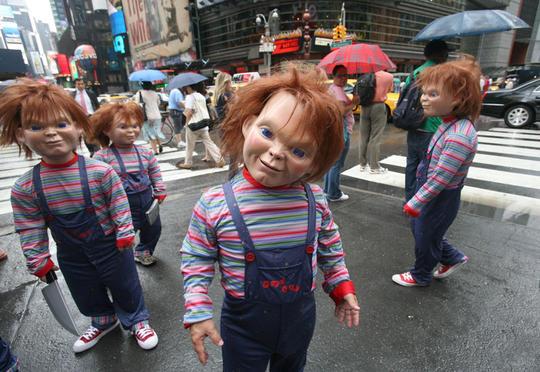 I’m pretty sure, then, if I’m following you Ohio pollsters correctly, the Bengals could beat Penn State.

The Houston Texans rolled into Denver and were embarrassed on national television. Not, like, Carl Lewis singing the National Anthem embarrassed, but still—this team should be very thankful their $72 million quarterback only needs to worry about the AFC South, and not the rest of the league.

A tie? Yep, that’s a tie at the end of the Cardinals’ record.

Why a tie, you ask? Well, it’s because of those damn Participation Trophies. It’s totality of warm fuzziness for all is spreading to the upper leagues. Everywhere!

Why keep score then…?

Just… imagine if the big game at the end of Jerry Maguire ended in a tie.

What if Jerry and Renee Zellweger just…agreed to be friends and split custody of little Ray.

It has taken me eight weeks—eigh-tah!—to realize that the Giants are wearing white pants at home, and not the grays of Ye’ Olden Days.

(This team is easy to overlook, honestly, and I’m just using the pants thing as a crutch.)

Well, here we are Lions fans, right in the thick of it. The team’s enigmatic ways are something I can only liken to the time Pepsi decided to change the flavor profile of the Crystal Pepsi product.  I like…I kind of understood it—sure, it looked the same as the original—but it was…different.

Then, they got rid of it.

Then, it came back again.

Then, along came Matthew Stafford.

Now, the Lions are the hot business, basically the Cindy Crawford of the NFC North. And we remember what she did for Pepsi:

The whirlwind tour of feel-good wins ended for Buffalo down in Miami, and now, the team is left to wonder if the loss to the Dolphins was for realz or not for realz.

Unfortunately for the fans, that’s a case of the Knee Tingles—which will make sex behind the RV a little more difficult.

Landry Jones reminds me of Bacon Burt, one of the Pittsburgh Pirates Pierogies.

The Steelers have to bring out Jones for more than one inning, though…

The Chiefs will play in America’s game this week when they head to Indianapolis to square off against the Colts. And by America’s game, I don’t mean the one on Fox. Nope, this is the real-deal, literal stuff, yo.

I’m just saying, take both teams—the red, the white, the blue, the hint of silver here and there—mix and match them in a circular pattern, add some spritz-y mist to the outer players in said circle, get out the drone for an aerial shot, and voila!

It’s sort of contradictory, but one way to suck is to blow fourth-quarter leads.

The NFL gave the Packers these Whoa-Holy-Shit-So-Hot-So-Color-So-Rush uniforms for the team’s game last Thursday:

Um…it’s been 30 years since I took any kind of art class, but I thought white was some reflective thing and not really a color. Regardless, what the fuck, guys?!

For the second week in a row the Raiders must fly across earth, to Florida, to conduct business. While that seems like an excessive amount of Florida visits for any person or thing, it’s easy to overlook by simply ignoring it, and shifting the focus to how much Jack Del Rio looks like the Professor instead.

The Eagles will have to rely heavily on their clubhouse employees this week when the team travels to Dallas.

Why’s that, you ask?

Well, for years now, the NFL’s crazy pappy, the Dallas Cowboys, will only wear their white jerseys, which forces the visiting team into their home threads.

Should the clubbies not get the memo, well, shit could get really weird. Quickly.

Yep, that’s a tie at the end of the Seahawks’ record.

By now, you should know my disdain toward ties in sports (if not, see above: Arizona Cardinals). The Seahawks still have a solid defense, though, so I decided to leave them and their other 11 payers in the top 5 and just whatever.

Following the Vikings’ loss to the Eagles head coach Mike Zimmer did some crazy shit, scattering stuffed animals with their throats cut (ripped?) throughout the locker room, with a message on one of the bigger toys that read: “Fat Cats Get Slaughtered.”

Of course, to me, the gesture instantly conjured up this classic:

Having a solid defense and running game: priceless.

There are some things money can’t buy, for everything else, well, there’s Amazon.com.

The game Sunday against the Eagles will be the biggest moment in 2016 for the municipality of Dallas since this guy came to town wearing this goddamn (actually purchased) hat.

Back at the top spot, the Patriots have some serious panache.

Take it from here, Morgan Freeman.

(Use this as your Morgan Freeman voice warm-up)

Yes—but it hasn’t been easy. Most things never are. You learn that, from time to time. I feel like, well, I think we all feel like men—men who have been institutionalized, punished for crimes we did (or did not do). In time, all we have are the memories of the present now turned past…those days when things seemed clearer, not so foul and deflated.

But those days are gone now…and I’d like to think the Patriots understand this, but now is not the time. Today, we look to the future.

We look to another eight weeks of Pigskin Piñatas.