When Ben Affleck stood on that stage several years ago, in front of seemingly bored millionaires and seat warmers, he was humble. He held a shiny statue in his hand, his voice determined and sincere he spoke about what a ride it had been…from the days of Good Will Hunting to the stuff after Good Will Hunting, to the things he probably wished were re-written like Good Will Hunting, to the full circle back in the Oscar spotlight for Argo. It was a great accomplishment, no question, and one that probably eased the memories of the box-office bombs throughout his career.

However, as Ol’ Ben stood up there, in front of the adoring masses, you couldn’t help but wonder about Gigli, about the music video appearances with Jennifer Lopez, about…Gigli. While the Oscar success should have airmailed those thoughts into another realm, a cosmos governed by Bronson Pinchot and Jon Lovitz, well, it didn’t. The success was great, yes, but there was still the focus on the negative. (It’s…just what we do, man!)

And somewhere in that reflection, scattered by the convoluted mind of a sports fan who also watches too many obscure movies, resides an interesting revelation: Ben Affleck is not Steve Bartman.

It’s been 13 years since the headphone-wearing fan of the Chicago Cubs reached up for that foul ball during Game 6 of the NLCS against the (then) Florida Marlins—something any fan would and should do—thus fucking up more history for the embattled franchise.

If you haven’t seen the video, here it is:

The players—mainly Mark Prior (the pitcher) and Moises Alou (the left fielder)—threw a tantrum, arguing that Bartman’s action was fan interference. OH, HELL NO!? cried the angry townsfolk. Of course, the cameras picked up every nanosecond of the drama, our first look at this terrible villain who did such an unspeakable act. 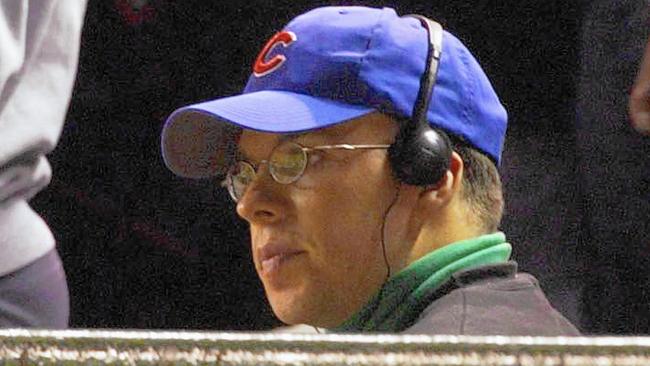 (At one point, I half expected to see Bartman stand up, rip off his shirt in a fiery rage, exposing a “White Sox For Life” tattoo or something red with cardinals on it.)

The incident was replayed, over and over and over, the haunting beginnings of this man’s innocence lost, this collapse that blindly equaled what the Cubs did after the fact (more on that in a bit).

Eventually—as you’d expect in the downward spiral of this nightmare sequence—the Marlins won Game 6, and then won Game 7. Game. Set. Match. Series. Tears and shame. The Cubs franchise and fan base was left unfulfilled—again—left to roam the Earth as wind-resistant specimens who know nothing of the thrills of championship parades, the feel-good hangovers at work the next day or the day after, the retelling of the tale at Christmas, and the June newborns named “Ivy Wall” and “Addison Street.”

When the dust settled, all that was left was a guy named Steve Bartman. What happened next, though, has been the decade-plus fuel of hellfire and chewed-deep-dish-pizza spat toward a man who really had nothing to do with the Cubs’ woes.

It became a national story. The aftermath—so extreme—was an abstract version of Silly Putty, stretching and morphing, sticking to this theory and that opinion, while picking up newspaper print from one periodical and the next, and so on. Suddenly, the non-baseball fan, who was simply checking the weather before heading out to meet Sandy and Billy at the coffee shop, found themselves unknowingly digesting this rich, sports-based material about a man who, not only screwed things up for the Cubs, but really sent his livelihood into (unwarranted) turmoil.

Bartman had police outside of his house, protectors against a possible lynch mob. Some in Chicago—not all, mind you—were pissed. People wanted this man to come forward. To apologize. To feel the shame and the tears. It was nuclear—and, sadly, for no reason!

Ignored was the wild pitch Prior threw after the Louis Castillo foul ball, the little league-esque error by Alex Gonzalez, and the general malaise that was Dusty Baker’s managerial style. (I’ll leave Kyle Farnsworth and Mike Remlinger out of this, just for the sake of word count.)

At that moment, unfortunately, it was simply the nerd in the glasses and those weirdo headphones, who raised his arms an ruined the plot—while the rest of crowd moved away, making sure that Alou had plenty of space to jump up ten feet and extend his mechanical arm into the heavens, catching the ball that was worth five outs…leading the Cubs to certain victory! (Well, in their minds that’s how it went.)

The moment happened, really, without regards to sanity, something that tends to occur in high-tension, championship moments…and something that escalates when that team’s fan base hasn’t tasted the Success Juice since 1908.

Yes… it was the makings of a glue-sniffing cult (or, at least, a mailer with their mission and morals).

Thirteen years later, however, the Cubs have their chance at vengeance. The team, bolstered by a group of young talent, a great manager and solid pitching—and almost a $177 million payroll—beat the Los Angeles Dodgers in the NLCS and now find themselves in the World Series.

They overcame the 2015 shortcomings—that ruined a crazy Back to the Future 2 paradox—and have made it to the glorious shores of Cleveland for a possible, “Beginning of the End of the Most Overblown Historical Chitchat Ever.”

Well, what about Steve Bartman?

During the span of 13 years, he has been a ghost-like entity who still lives in Chicago and hasn’t been seen—in the media’s eye—since that fateful Game 6. And this has been by choice. That he has continued to make for entertainment fodder—beginning in 2011, when his dastardly deeds were re-introduced to the masses during an ESPN Documentary—doesn’t make him a Kardashian wannabe. Far from it: Catching Hell  wasn’t something produced by his camp as a reminder of his existence.

Really, he seems not to want the celebrity label.

Or I am missing something?

Regardless, 2016 happened! The World Series…happened!

The amazing Cubs’ run has only accelerated the infatuation with Bartman. Not long after the final pitch against the Dodgers, his name was being tossed around as a candidate who should (OBVIOUSLY!!) throw out a first pitch during the World Series. Why not? Forgive and forget—the guy deserves this spotlight, too! Hell, let’s play this on the scoreboard as he walks out onto the field:

The reality being overlooked on this type of Bartman saturation, however, is this—from family friend, Frank Murtha:

Steve is cheering for the Cubs and continues to be a Cubs fan. He just wants everybody, moving forward, to respect his privacy and let his life continue to unfold as the grand plan has it. Unimpeded by things that … have been blown out of proportion.

Blown out of proportion? (It’s…just what we do, man!)

Even if the Cubs win it all, erasing the long wait from 1908 (trademarking that jingle by the way), and then win the next 45 World Series…a lot of people will still remember that night in 2003. They will remember—with a new-found smile or not—what Bartman did, the tough-luck feels he provided to the Cubs community.

And though people who want fame and work in the public eye would expect that type of trolling, that type of dismantling—while also basking in all of the attention— I doubt a guy like Steve Bartman does. Ever.

Steve Bartman is not Ben Affleck.