Long-winded: There Is (No) Crying in Baseball.

So, there she was…jogging to the dugout in between innings, her hair curly and blonde and pinned nicely underneath her ball cap. She was a ballplayer. It was baseball. She had missed the goddamn cutoff woman.

Tom Hanks could not believe it. This fundamental lapse on the part of Stilwell’s mom had cost the team a run. (Stilwell was the fat kid, portrayed later in life by the guy who stole Pee-Wee Herman’s bike).

And runs are precious, man.

Tom Hanks was pissed, to put it mildly. And when Tom Hanks gets pissed, he yells—homage to one “way” coaches get/got their point across to a player. You have to hit the cutoff man, he explained in some sort of Hanks fashion. Actually, he screamed it…along with fun words like head and ass.

Then it happened, like that ship hit an iceberg all over again, eventually re-freezing Leo. (Smell ice, can ya’?) Evelyn was a mess. The tears, the snot, the combination of both mixed in with apologies…and hiding them was not a possibility.

Of course, Hanks noticed. He was confused. Crying? Baseball? Crying in baseball?

The predicament was followed by one of the most iconic phrases in baseball—even sports—history:

The tirade explaining this baseball theory, a mishmash of pissed off that was borderline quasi-nuclear Lou Piniella, got Hanks in trouble. Moooooovvvviiieee trouble. One penis joke directed at the umpire later, he was ejected.

What did we learn? From that point on, crying in baseball was to be looked at with the same head-shaking no-no as the crying baby on an airplane.

Was Hanks in the right, though?

MLB in the year 2015 is almost here. If you have the MLB Network or follow the seem-enthused media hounds who surround this game, it feels like it never ended. Sure, it’s not the NFL. Nothing is. And I completely understand if Opening Day strikes you as…useless.

However, baseball is a great game. The history, alone, is as interesting as any water cooler-type stuff you will throw around on Monday, Tuesday mornings.

Real quick! Here are five things to say around the water cooler this week:

Wait, where the hell was I? Right, baseball. And the history of crying.

Baseball carries a passion with it, that I can only hope each person reading this—or unfriending me/deleting me/etc.—gets to experience in some way during their years. Seriously.

Undoubtedly, not every person in the room had their opportunity to play it, coach it, bat boy it…whatever. Or maybe they didn’t want to play. For them, they won’t get the inner-associations when people talk about the smell of the baseball glove, the euphoric memories fresh-cut grass can give or the helpless feeling you get when the damn curveball “don’t” curve. They won’t know what it’s like to swing and miss, to dive for it and come up with dirt, to misread that catcher’s signal as “high fastball” instead of “changeup outside.”

However, there is still plenty of amazing opportunity to experience the game, the beauty of baseball—although it does change the rules for shedding a tear or two or three…or holy shit, it’s Prom all over again, the limo is waiting outside, and your hair needs a fixin’!

And yes, it happens. It DID happen.

While I was rehashing all of my fond 2014 MLB memories, there was one incident that became cemented in my head like Eddie’s steel plate—and my hairline hasn’t looked right, either.

It was the summer, Los Angeles, and the Dodgers were streaking behind a reassurance of Matt Kemp. (For those of you who have no idea who the hell Matt Kemp is, here’s some pop culture, including Rihanna’s ass, via www.obsessedwithsports.com: )

I got a phone call—the quick kind in text-message form—from a friend of mine. My friend told me that a mutual friend had tickets to the Cubs-Dodgers game, with an extra seat that could be mine if I obliged. I did.

We all met up at the mutual friend’s palatial Los Feliz home. From there, we would battle the Sunset traffic jam on our way to the “secret parking area” which I won’t divulge. A few blocks—a few hills, a dump-type area, one “Hey how fast can you throw” excursion, and this one guy telling stories—later, we were there. Chavez Ravine. Staring at the history of one of the most historic venues in all of sports. (Again, it’s the beauty of baseball I wish for all of you—or, at this point, probably the one person left reading this. Thanks, mom.)

There were pregame cheerleading things happening on the field, taking some of our party to the stands prematurely, leaving us thirstier folk to spend tiny mortgages at the concession line.

And, oh man, this one guy’s stories would not stop. I got him a Diet Coke.

We made our way up to the seats. I got to see a few of the mutual friend’s family, people who knew me the same way you know your friend’s brother’s friends. It was great, especially the vantage point. In all my time of going to Dodger Stadium, 10-plus years, I had never sat in the left field bleachers. I never had the opportunity, or actually, never really thought about sitting out there. But what a view, it was incredible.

However, it was what happened behind me—during the game—that took the night.

It was somewhere in the later innings, after Kemp had homered and after we listened to a version of God Bless America, which left me feeling…very ‘Murica, that  I heard something. It was a mix between a pep talk and a dramatic reading of someone’s apartment lease. You know, rules and shit and why not to break them…and how breaking them can make one feel.

And, suddenly, though no one missed the cut off man, there were tears. Man tears. 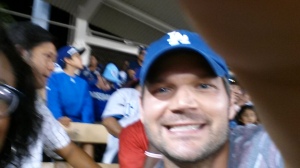 The guy behind me, right there, is crying.

Now I know what you’re thinking. Hey Couch Guy-A’HOLE, why be an ass and bring this up in a blog?

Sure, they didn’t know me and I didn’t know them. It’s a valid point. (That’s why I chose the blurred picture.) But, the whole time I was listening to this barrage of self-help and sniffles, I kept thinking about A League of Their Own and that scene, that phrase. And during my eye rolling—really, it was a deep intervention—I began to ponder Hanks’ words and how they are perfectly true…in a way.

You see, Hanks was wrong…sort of. There are acceptable times for crying in baseball.

-You win a championship.

-You lose a championship.

-Your team, that you play for, wins a championship.

-Your team, that you play for, loses a championship.

-The camera is on you during the Star Spangled Banner.

-You…get something in your eye that has wings and a stinger.

-You…get something in your eye with wings and a stinger, which caused an error of sorts, thus losing the championship for your team (See above).

-You have completed your last game, during a 20-year career, and there is a Hashtag created about you.

-You zipped too soon.

If any of those scenarios happen, let it flow. Zero shame.

There are, however, unacceptable times for crying in baseball, which gives street cred’ to what Hanks had eloquently yelled.

-You butt-fumble it (not sure if that is even possible in baseball).

-You didn’t make the team.

-While having an in-game chat with someone in the stands.

If any of those scenarios happen, you end up looking like the Three Amigos when they figured out it was “REAL BULLETS!”

Before the game ended that summer night, with a Dodgers win, the two guys behind me stopped chattering relics of old Dr. Phil shows mixed with Stuart Smalley. The crying had ceased. Oddly enough, it started to rain.  It was really strange.

Were the mighty heavens crying, too, listening to those guys?

Or did Evelyn miss another damn cutoff woman!?!?!