Off the Couch: The “10,” the Tennis, the Desert and the Smoking Grandma.

Every so often, here and there, it’s good to get off the couch and travel around this place called Earth. The places, the people, Ramada Inn’s breakfast spread…the “fruit” Danish…there is an interesting story waiting to happen every step of the way. However, because there are bills, kids, the dog—kids named Bill whose friends say is their Dog—it’s not always easy to make like tight denim on a large ass and just split.

Thank you for reading,

CHAPTER 1: This is History.

From the earliest of recorded days, I’m told somewhere in the 12th Century, king-types would take time from their daily ruling to smack a little ball back and forth by using their hands. At some point—most likely with bruised palms throbbing like a cartoon thumb after getting hit by a hammer—someone came up with the idea of using a racket-type…thing.

The game would evolve over the years, getting the British makeover from lawn tennis, eventually morphing into what some people watch today. Though not nearly as popular as the mainstream sports of the US, tennis does have an interesting following in America. Besides the US Open, the Grand Slam held at the end of August in New York, there are several tournaments around the US map worth a look-see.

Once such tournament is the BNP Paribas Open in Indian Wells, CA.

CHAPTER 2: First, You Have to Get Down to Indian Wells, CA.

The excitement grew, slowly, as I gazed out the window of a sporty Mercedes-Benz, the chariot shuttling my friend and me out of the Los Angeles area, down the 10-Freeway. It’s a petite model Mercedes, one that comically fits me like a tight sports coat. Instead of opening the door to get out, I felt like unzipping “it” would have saved time.

At one point, as usual, I burned my tongue on the Coffee Bean coffee; it reminded me of a summer job I once had, one that involved watching molten steel being poured into a cauldron.

But, I don’t think we’re in Wheeling anymore. And this is the only Toto I know…

Surrounded by mountains, the road is a seemingly straight shot to nowhere, desert…there are billboards informing the traffic masses someone you thought had vanished off the entertaining circuit will, in fact, be performing at some random hotel/casino near you. Just keep going straight—which is easy to do.

You pass through Beaumont, a small spec on the grid, which carries the same name as the town where all Kevin Bacon wanted to do was dance.

You see interesting signs—that seem like a literal description…more of a dry-humored warning from city officials who secretly desire to be on SNL: 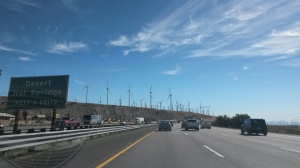 You see the massive windmills, made famous by the movie ‘Mac and Me.’ And don’t worry, there is zero blame If you haven’t—ever—watched Mac and Me. Let’s take a break, though, and watch a bit:

The car’s outside temperature had shot up 15 degrees. (In my head, the coffee was saying: “Holy shit this is hot!”) I knew we were getting close, though. Tucked behind rows and rows and rows of trees, we passed by Palm Springs—Indian Wells’ more-known neighbor.

My excitement had reached the level of Six-year-old Kid on Christmas Morning.

We were 15 minutes away from the exit.

…Five minutes later, with my friend’s lead right foot hitting the gas, we were at that exit. My hair was wind-blown and the top wasn’t even down. It was ludicrous speed and I was Colonel Sanders.

An exit onto Washington Ave. is an exit to another world. Nothing amazingly special, but the fast-paced weaving you left no more than five seconds ago slows to a dramatically complacent pace…like the snooze button is constantly hit on all of the clocks.

This was next to me at a red light:

It’s a land of sprawling complexes—condos, apartments, communities that look like a cross between resort and low-level security for the rich and shameful—mixed in with golf courses, tennis courts and enough miniature and full-size shopping plazas to keep a person busy finding “new” stationery stores for years.

This time, like the last five, we hit the mini-plaza that houses Goody’s, a fun little breakfast spot that reminds me of a cross between The Sonny Boy in Bridgeport, Ohio and a Denny’s anywhere. All of your choices from the menu are hung on a wall next to the cashier, each advertised with an amateur Polaroid picture. It’s quick, cooked on a griddle and mostly covered in some form of cheese…what the hell else do you need?

The tennis complex sits in front of a mountain-laced backdrop, making up a portion of Bugs Bunny’s favorite valley, Coachella, and is marked by the lights towering over the palm trees. The local police—guys who look exactly like you’d expect when dressed in black in the desert—direct you to turn “this way.”

It’s one of the first times we hadn’t gone straight since leaving Los Angeles.

The parking lot is a beautifully strange postcard moment—although the dust kicked up from the putting-green-like surface reminds you of the thick, dusty haze in your grandparent’s attic. It’s packed, too. The traffic that didn’t enter Indian Wells has now multiplied like a Mogwai in a 40-minute rainstorm.

Regardless, I unzipped the car!

We walked along the path with the rest of the fans, some whose excitement to get “there” resembled eager nut-bags at a Wal-Mart on Black Friday: bobbing, twisting and stepping around—sometimes over—children while avoiding moving cars.

Then came a warning: “Watch out for the cars coming through to the handicapped sections and don’t get hit,” said the event staff woman, “we don’t want any of you to be handi…capped.”

There are better ways to say, “Watch out for the cars, idiots.” No question. But even the prettiest apple will eventually spoil when it’s left out in the heat for too long.

At the gates I proved to the security folk that my water wasn’t vodka and that my belt wasn’t loaded. A joke here, a joke wasted there, and one tunnel with fun echoes later we were inside, and I was ready for some “Hey, I’m here, as you can tell by this tennis court behind me” pictures.

The venue is second to none—when Larry Ellison is the tournament’s owner, you’d expect that, I guess—holding rank as “One of the most fan friendly” during the ATP/WTA calendar. From the practice courts, where a fan can sit in the surrounding bleachers and watch the best of the best from only a few feet away, to the Hawk-eye technology on every court in-play to the giant big-screen TV outside the main stadium…and yeah, to the multiple bar areas that are littered with dudes and dudettes, it’s just a fine damn establishment.

Nice tournament there, Larry. Got a twenty?

This year, most of the focus was witnessing a continuance of quasi-wacky history surrounding Serena Williams. But that was Sunday—or, Day 2 of this ramble. Saturday would be the warm-up.

The heat smelled like kettle corn and Banana Boat, mixed with the last part of a beer in a hot plastic cup.

Where to go, first?

What used to be a paper hand-out informing you who’s playing where, is now an App—complete with live practice feeds and news about this and that—which makes it easier to plan the experience.

Stadium 1 is the sure thing, where the “Top Dogs” will be playing throughout the day. It’s huge, too, coming in second to Arthur Ashe Stadium at the US Open for huge-ness among tennis courts…In. The. World. Yo.

However, there are multiple courts beyond the main stadium where some of the best tennis can be seen. To get into the swing of things, we crammed into Court 8 to watch Fernando Verdasco. 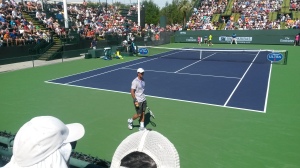 It was the beginning of a whirlwind day watching this 12th century remake called…tennis.

Time is a precious thing, though, so like the priest in ‘Spaceballs’—yep, that’s twice for ‘Spaceballs’ if you’re still reading—we are going to do the short, short version.

My head pushed up against the practice court fence while perfectly adjusting my camera’s phone between a link, I stood like a willing paparazzi to enjoy one of the greatest players in the history of the game…doing stuff.  Rafa and me: Lefties separated by only ten feet and a rent-a-fence. My level of excitement had escalated above the six-year-old kid on Christmas morning. I was Ralphy, finding that Red Rider and a Playboy at the same time. Mind explosion.

It’s cliché, but it was the perfect ending—a surreal moment brought to you by the power of sports.

The walk out of the stadium was calm, though I was still a shade of Chris Farley energetic. I zipped on the car. We missed a major pile of confused traffic—some deciding to wait it out and drink beer instead—by weaving in and around other parked cars. That, actually, made the day perfect.

While the unknowing sat and honked, we were already on the 10-Freeway, our exit only a few miles up the road. Agua Caliente —which is Spanish for Heavy Perfume Plumes and Cigarette Smoke—was our destination.

The check-in process at Agua Caliente is always a secondary thought, with the spectacle of tube-in-nose smokers—rough and tough grandmas wearing the sweet polyester while pumping nickel after nickel into slot machines—right behind you. Drunken girls wobble in and out of the lobby doorway like puppies figuring out their legs during a first walk.

The heavy smell of bad perfume and cigarette smoke burns the senses, all five. The rooms, however, are really nice. So the lobby spectacle is a short-lived nuisance.