She had no idea, either.

When she lifted her microphone on that September day, her hair well sprayed and blonde,  and she sang Stand by Your Man, there was no possible way she could have understood the impact it would have on woman involved in the sports renaissance of calling into local talk radio shows or, much later, the effect it would have on Twitter.

It’s a shame, too, because the anthem has only grown stronger and stronger as the decades have come and gone. From Kurt Warner’s wife to Giselle to Dallas Latos, all have taken the opportunity (via the media) to stand up for their man, their favorite player. A man they call, husband.

Does it work? Nine times out of 10, no. It just leads to more backlash and distraught fan bases. AND blogs (like this one) popping up with hot take after hot take, not only dissecting the misled facts/opinions of the rant, but proclaiming that they are now the team’s Yoko and, oh no, they won’t win another game until you, my dear, are outta town and husband’s sports life.

During Game 6 of the NBA Finals, Steph Curry’s wife, Ayesha, decided to take a turn at social media history, her turn as Tammy’s carrier of the torch, by letting her text speak words of power and harsh hell-casting chide toward the NBA.

Her tweet? Since deleted. But life is a screen grab so: 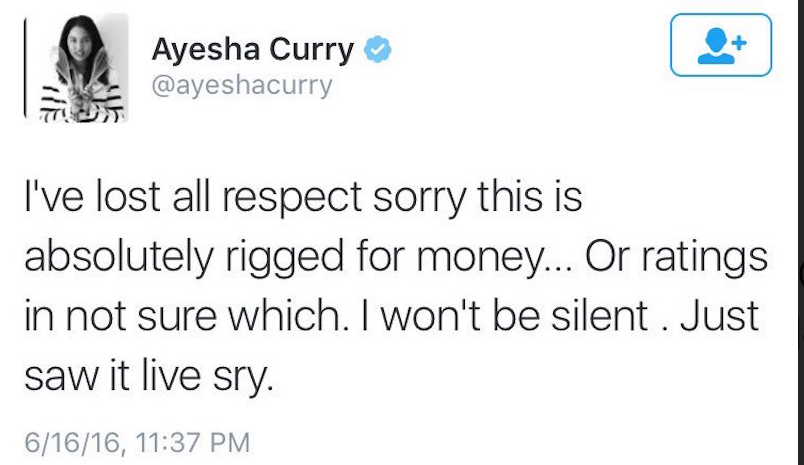 At the same time 'Guarding Tess' was coming on Starz. Weird. https://t.co/CbYCSvDVZL

She had trouble getting into the building, too (via For the Win):

Concerns? Well, no, none that I can see. She was pissed. There is a great deal of passion and involvement that goes into being of fan of sports. Think of Joe Fan, who takes the game—wins and losses—and makes that his life. Now, take a woman whose actual life is involved in the game…family, day-to-day reality. There’s no Uber shift, no “Hey, how may I help you?”. It’s all about the literal meaning that sports are life. Whether you think it made sense or not doesn’t really matter.

Put Your Money Where Your Mouthpiece Is

None of Ayesha Curry’s tweets could withstand the awesome-awestruck-holy shit moment that was Steph Curry’s mouthpiece toss that hit a fan.

Watch the drama (via Deadspin):

This wasn’t his finest moment, without question. But the real issue here is that Curry’s mouthpieces are expensive—apparently. 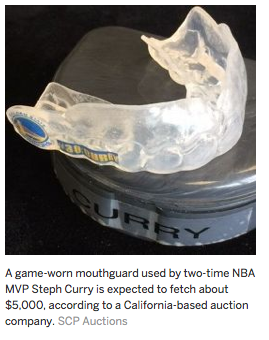 And Travolta though that five-dollar milkshake was excessive. Christ man.

It was on. I watched it.

Nicolas Cage had one hell of a time protecting Shirley MacLaine.  She was constantly yanking the cranks of all seven grown-ass men who were hired to watch her open envelopes in a bathrobe. That’s probably the logline (wink, wink).

Her shenanigans eat at Cage’s soul like a hungry bunny to a carrot, and he does not like it one damn bit.

Which brings me to this: Nicolas Cage always looks like he’s cold and could be out of breath. That’s method acting if you’re climbing a mountain or hanging in Buffalo for the spring, but when you are in charge of keeping Shirley MacLaine safe, that shit is unacceptable.

So Shirley is missing and the President of the United States is pissed. But it’s hard to keep that believability because the guy sounds like Jerry Jones’ long lost cousin. He’s funny and says things like “Gad Dummit” and “Dow-near” and “Sunuvabitch.”

Luckily, Cage finds Shirley MacLaine buried in a shed…he gets this information by shooting off one of the limo driver’s toes. Yep, that’s Chicago. Or, wait…never mind.

Cage digs her out while Tackleberry from Police Academy (some degrees of separation there, if you know your Short Circuit-Police Academy cast) helps. They all have on slacks. It’s fucking powerful. A man. A shovel. Some slacks.

Shirley MacLaine survives, and Nicolas Cage makes her sit in a wheelchair so they can wheel her old ass out the hospital, abiding by the wishes of the health board and all its doctors. HMO. PPO. Etc.

And guess what? She listens! It’s a great moment and, more importantly, Nicolas Cage gets a little color on his cheeks.

Few things are as sacred as a man and his nether region. Name it, talk to it, hold it like a spare remote…whatever…it’s just science. It’s a part of us, as dudes, and maybe one of the only collectively understood aspects about our side of the species refrigerator.

This level of importance leads to the truth: we collectively gasp—maybe weep—when we see that region get kicked, stomped, smooshed, smashed, burned, rolled, pinned, or anything that could damage the sacred region, regardless if we know the guy attached to the region or not.

Last week, while playing the Los Angeles Angels of Anaheim, Uribe took a 106 mph grounder off the bat of Mike Trout right into the dick zone. Though Uribe tried to regain his ground and make a play on the ball, the damage was too great, taking over the seasoned veteran like venom from a snake.

It was the kill shot.

Watch (if you dare!)

Uribe was carted off the field. His balls were a mess—a lesson to the younger generations out there who think cups are silly.

His reasoning for not wearing a cup:

Juan Uribe (testicular contusion) said no BP today. Asked why he doesn't use a cup, he said: "I don't think the trainers have my size." Oh.

Funnier: A shiny, expensive car means very little if the engine doesn’t work and the tires are constantly flat and the gas is full of lead and the doors don’t open and the girl you’re trying impress doesn’t like sitting in it, or on it, mmmmkay?

I had no clue tickling competitively was a thing. But, it is, and apparently, the rewards are real CASH MONEY. Warning though, to the adventurous sort who are looking for a new sport to dominate, I would listen to this guy’s tweet (and read the damn thing):

Before you enter a competitive tickling competition, please read this. https://t.co/yHdbHdkawJ pic.twitter.com/lVhqBCQ8Pf

Yep, the “sport” label is a little grey…like 50 shades. No different from playing tummy sticks with Vince Vaughn in Wedding Crashers.

There were a ton. Here are two:

Some in China believe the Buffalo Bills won the Stanley Cup: https://t.co/Bvnr2AVCnZ pic.twitter.com/284xowHa6p

Apparently, Prince had more "secret" children and siblings that anyone could have ever dreamed https://t.co/KXvWcRvpPV

Karma Got Me…Actually, You Can Say It Sort of Stung Me

Last week, as you may recall, I was asked to save the elephants…six separate times. It was a comical exercise. So I used the Cause Heads for my (our?) entertainment and felt no shame. Zero fucks, as the kids say.

Then? Karma struck like a pissed-off bolt of lightning in a bad movie…

Rick sits on his couch, wearing nothing but boxers and a white tee-shirt (that clearly has some sort of haphazard mouth-missing dribble on it). He’s calm. Until…

Now, who in the hell could that be…Ed McMahon?

Rick goes to see if it is, in fact, Ed McMahon.

He opens the door…

(looking at a young girl holding an I-Pad)

(looking at this disheveled dude standing in his doorway)

Hi. Did you know that the bee population has been severely…

As the girl continues to ramble, Rick slips into a zone, realizing that Ed McMahon is actually dead.

Rick snaps out of his trance just as the girl is finishing her speech about the endangered bee population. He is impressed by her memorization skills.

…and all it takes is a donation.

The girl takes her I-Pad, while Rick starts to close the door. She begins to exit when…

…but, if you find out this has anything to do with the elephants, I know who talk to.

I Understand if You Skip This Announcement

I watched a Parking Enforcement employee place a ticket on a windshield one day and I immediately thought of sports announcers and reporters.

When I was younger, playing sports in the backyard sometimes (always) had an announcer’s voice calling the action from the booth—in my head. They were the same ones I listened to while watching a game on TV. For the play-by-play football highlights, it was Harry Kalas’s dynamic voice that I learned watching NFL Films. Baseball would be Johnny Miller, Bob Prince, sometimes Chris Berman, or, of course, Vin Scully. I chipped to the other Johnny Miller. I shoot hoops to Dickey V.

Myron Cope always found his way in there, regardless of the sport. Double Yoi!!

They were a part of the game. However, that failed in comparison to the actual game, the sport, and the guys playing that sport.

That, to me, was all that mattered.

Today is a different time, though. An announcer’s performance—like most entertainment during the Social Media age—is discussed and dissected almost as much as the game they were calling. There are even websites that focus solely on covering the announcer, the sideline reporters, basically all of the media.

Need proof? Do a search for, “Joe Buck Sucks, or  “Erin Andrews, Terrible,” or “Harold Reynolds and Tom Verducci are the Worst,” or “Vin Scully is Overrated,” or “Jim Nantz Blows,” and enjoy the show.

(In fact, I would bet that several of you probably had the itch to throw your cellphone, tablet, or computer through a wall after reading some of those names. Sure, some of that could just be the reaction you get reading this ramble, but mostly, it’s the unexplainable rage fans get when you discuss the sports media.)

The reactions and length of the ruination are equal to seeing that parking ticket fluttering underneath the windshield wiper.

But We Can All Agree This was Pretty Damn Cool

Sager, a longtime sideline reporter covering the NBA has battled leukemia since 2014. In all his years covering basketball, he never worked an NBA Finals game. Until now, thanks to ESPN.

And, it was great.

Not because of his questions. Not because of the way he reported and gathered information. It was great because we, as sports-watching hoards (who apparently are really into critiquing reporters and announcers), got to watch a man say, “Fuck you, cancer. I’m working here.”

Moms (and Nuns?) All Over the World Just Lost Their Greatest Fear-Saken Zinger

An adult-oriented site is working on accessibility, with material for the visually impaired https://t.co/3t3A574wje pic.twitter.com/astxK4r9k1

And that’s that…enjoy the weekend. Special shout-out to the Pittsburgh Penguins for winning the Stanley Cup. Yinz made me ‘member 1991 and 1992 like it was dahn-tahn yessirday, n’at.

In case Yinz aren’t sure how’s come, let’s have Myron take us ‘ome: