Politically in Accuracy: Mitt Romney and the Lost Hair Gel.

A completely unreliable and fictitious source – the same ones used by major news groups – has confirmed that Mitt Romney’s recent sappy-sad attitude occurred over the loss of his favorite hair gel. Recent-speculation linked his demeanor to tax issues, twitter-smack and Tom Brady’s damaged beak, but they were dead wrong.

Members close to the G.O.P. Nominee will not comment on this issue, but one Official did release this statement:

The finger-pointing and blame-game has left little time in the already busy schedule for Romney, admittedly missing key book-club meetings, Glee episodes and Friday’s game-night with Newt, but he has vowed never to stop looking for the AXE canister, allegedly. But, Romney better hurry his search-pony,  more unreliable sources have already began accusing him of wearing a Pat Riley wig all this week – thus explaining all the head-scratching during his campaign questioning.

After hearing of the dilemma, Democratic forces moved quickly and ruled out the possibilities of President Barak Obama as the culprit behind the missing gel, opting instead to release his most recent speech:

Following his ground-breaking banter, the President reportedly told a gas station clerk that he has no clue. Then, when asked about the missing hair gel the President calmly replied, “Oh, you meant that? Yeah, it looks like a Pat Riley wig.” 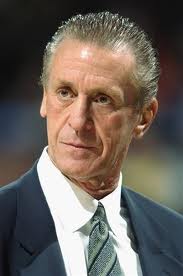 It’s difficult to speculate at this point on whether or not the gel will be found, but one thing is for certain: The political world has noticed, and baby seals still make for a really comfortable slipper, allegedly. The saga continues.

It’s best advised to pack a sack-lunch and set the DVR to record-all-mode because this thing may never end!

Until then, the Couch Journalist is on it…sort of.

Thank you, and good morning – in London.